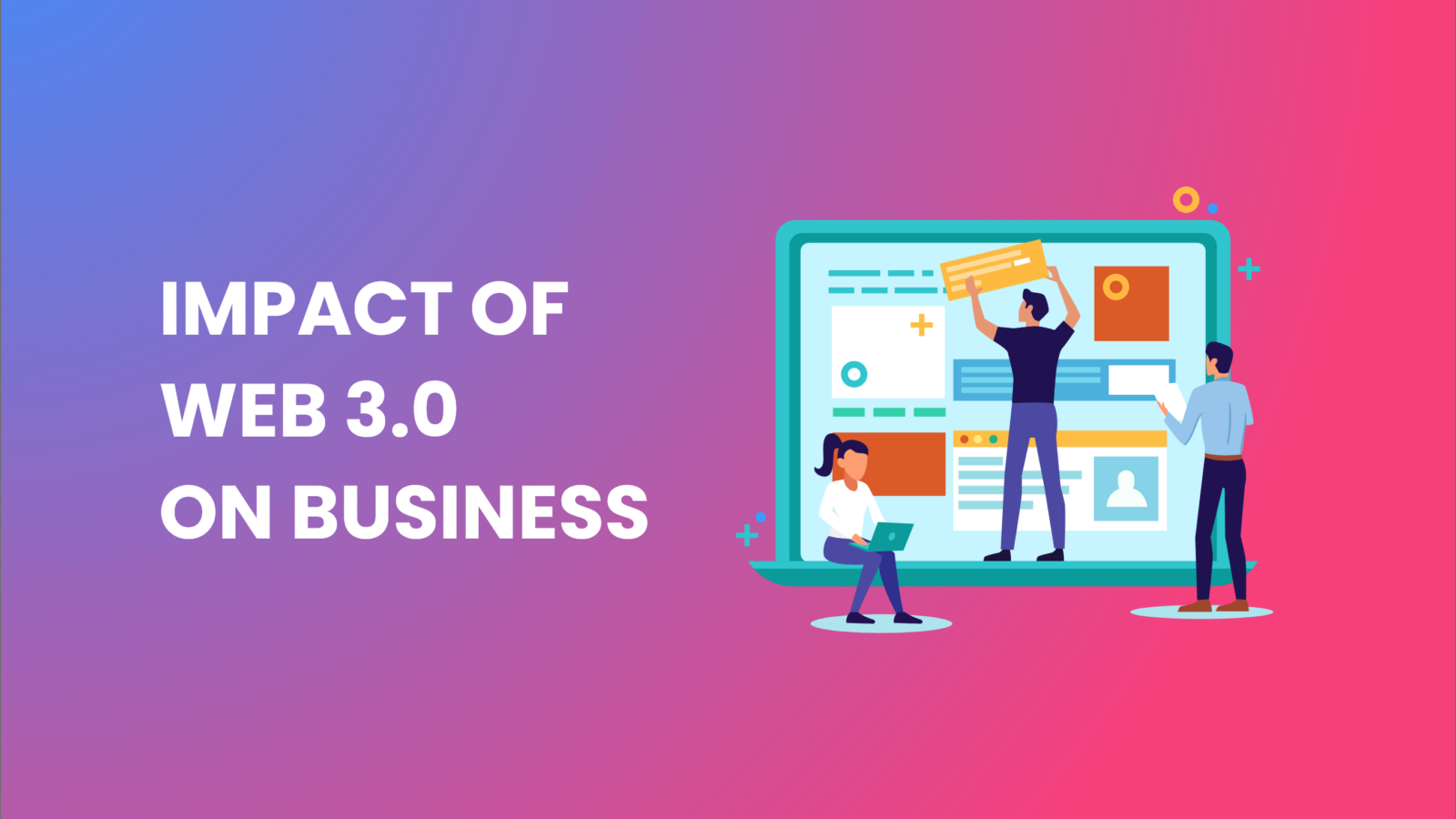 Every business owner would benefit from understanding the Web 3.0 impact on businesses in today’s world. And that’s because Web 3.0 is ready to revolutionize how companies operate and how internet users interact with the digital world. In this article, we’ll take a closer look at Web 3.0 Blockchain, including what it is, what it contains, and what benefits it has to offer to your business and customers as a whole.

Worldviews have evolved as a result of blockchain developments. Web 3.0 Blockchain is the real revolution that has started to unfold in the nooks and crannies of the Internet after establishing itself as a key blockchain platform trend in its own right.

Before understanding the Web 3.0 impact on businesses, let’s understand Web 3.0 a bit better. It is, after all, the next internet revolution that would provide a decentralized environment based on blockchain, with an emphasis on intelligent information accessibility. For example, in the Web 3.0 age, search engines would deliver customized insights depending on the context of your search. The information stored on many computing devices will eventually displace the centralized data repositories stored on centralized servers. As a whole, it will function more like a decentralized peer-to-peer network with no central authority.

Consider the following scenario: “Web 1.0” was the term used to describe the early days of the Internet in the 1990s. Although the Web was seen to democratize access to information, there were few effective methods to navigate it beyond visiting a page and reading or watching through static content compiled by one or more content creators. It was unorganized and overwhelming in a lot of ways.

Later, in the mid-2000s, the Web 2.0 revolution began. It advocated many organizations to build centralized services. However, it extended the capabilities of the internet beyond information browsing. There were platforms like Google, Amazon, Facebook, and Twitter that came into existence to make the Internet more organized. These platforms made it easy for people to connect and conduct transactions online. However, critics contend that these corporations have gained excessive influence over time.

Web3 is about reclaiming some of the power that has been taken away from us. Following explains what happens in a Web3 world. People control their own data, so they can use social media, email, and shop all from the same personalized account. This creates a public record on the Blockchain, which can be portrayed as a digital ledger.

Many technologies will need to work together and rise to the top of the heap to accomplish all that is expected from Web 3.0 Blockchain. And this implies that just integrating blockchain technology will not be enough. Some of the developing technologies of our time will be the primary components of Web 3.0 since they will be required to make the Web decentralized and semantic. And some will be superseded by different ones with Web 3.0. However, blockchain and cryptocurrency will always be fundamental for Web 3.0.

Web 3.0 Impact on Your Business

The Web 3.0 impact on businesses will make them highly user-centric and more transparent. In terms of user data, everything that was wrong with the way companies were run in the past will undergo a radical transformation.

So, how will businesses make use of web 3.0 technology? Traditional and new businesses will welcome Blockchain technology and the possibilities it brings with it. Businesses of all sizes and types will use blockchain. You will see that your applications are receiving a blockchain update, in which everything will be made public and accessible to everyone. And there are private blockchain networks too. Those are networks that allow only a selected group of participants into the blockchain network.

Your customers regain control of their data

This is perhaps the most important way web 3.0 impacts businesses. Web 3.0 promises a major change in how the Internet works, focusing on user privacy. This is indeed a problem that has been discussed for a long time but hasn’t been effectively solved.

Web 3.0 uses blockchain technology, unlike Web 2.0, which leverages the Internet to develop applications. It is technically safer to store client data on a blockchain since it is decentralized and its usage by businesses is transparent, therefore safeguarding it from hackers. Some experts say the transfer of data ownership back to consumers could disrupt the technology sector. And this is because many tech companies would lose access to the data that has provided them with a competitive edge.

Because of blockchain technology, visitors to your website will have a more pleasant login experience. Consider how many times you’ve logged into websites using your Facebook profile as a login. Blockchain technology employs the same principle as Facebook, which already owns your user information. Using Blockchain, however, you are the only owner of your information. For business reasons, your clients will still have the ability to sign in with ease on your website. And you will no longer have to worry about safeguarding clients’ data for them since it is already more secure.

We believe that Web 3.0’s enhanced security measures based on blockchain technology may reduce the risk of hacker attacks. According to IBM, Blockchain is unlikely to be hacked since documents are encrypted from beginning to finish. Making data anonymous and requiring authorization to see it adds another degree of protection to your website, preventing hackers from attacking it. Apple, Google, and Facebook are just a few firms that are currently using blockchain technology for security.

Other Benefits of Web 3.0 for Businesses and Customers

When reviewing the Web 3.0 impact for businesses, the following benefits are the cherry on the icing.

Until recently, IT giants managed and used the data generated by users. End-users will have total data ownership due to Web 3.0, which Blockchain drives. Every piece of information carried across the network will be completely encrypted. As time goes on, users will be able to decide what information they want to share with corporations or advertising firms and how much money they want to make from it.

Users would be able to access data across many apps using Web 3.0 technologies rather than being restricted to a single platform. This eliminates the need to be concerned about one device(on a certain platform) being able to access Web 3.0 services while others are unable to.

Under Web 3.0 technology, it will not be necessary to have a central authority for a blockchain. Create an address, and you’ll be able to engage in the network. Anyone may join and participate in the network. This would remove the possibility of people being denied access based on their gender, income, sexual orientation, geographic location, etc. This technology will also make available the ability to move digital assets and wealth across borders in a timely and cost-effective way.

Features of Web 3.0 will encourage the use of pro-privacy and anti-monopoly approaches in business. Due to this policy, centralized platforms that retain control over their users’ data will not be rewarded. Decentralization and privacy will take center stage in the future, and we should expect a dramatic shift. Because consumers now have a choice over how their data is shown, the monopoly of tech companies will be broken. And there will be fewer to no instances of data privacy intrusions.

As an award-winning software engineering company, we strive to remain knowledgeable of the latest technological developments. And we believe that Web 3.0 will have a significant impact on how we interact with the digital world.   And this transformation will affect everyone, not just consumers. The Web 3.0 impact on businesses will be both traditional and disruptive. It will also be equally massive.

However, the evolution from Web 2.0 to Web 3.0 will take time. Businesses will have the time to review their processes and determine where they fall on the decentralization and transparency spectrum.