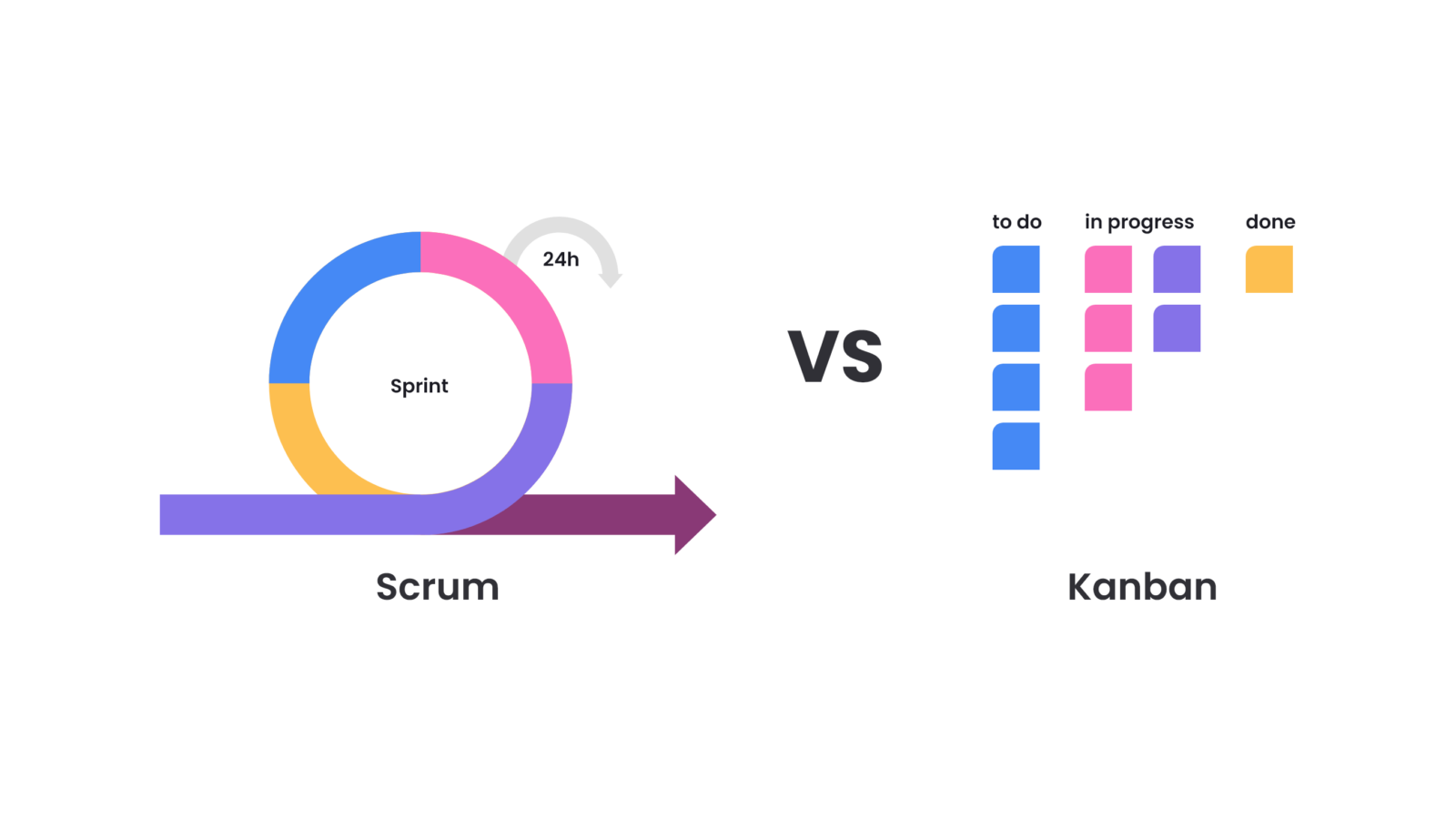 When it comes to implementing an agile development or project management system, “Kanban vs. Scrum” is a hot topic. In contrast to Scrum’s structured, short work sprints, Kanban’s methodologies are more fluid and undisrupted.

The differences between scrum and kanban practices are simple to point out, but the demarcation between them are obscure. Even though the practices change, the principles are essentially the same. Both frameworks will assist you in developing better products and services while experiencing fewer problems.

Scrum vs. Kanban: What are the Differences?

Because both Scrum and Kanban come under the Agile methodology umbrella, they are excellent frameworks for breaking down bigger, more complicated projects into manageable portions. Let’s compare the two to address the Scrum vs. Kanban debate.

When discussing Scrum vs. Kanban and their differences, we must first understand them separately.

What exactly is Scrum?

The Scrum framework divides a project into short sprints of usually one to four weeks. At the end of each sprint, a Scrum team, usually led by a Scrum master, strives to produce an increment. As part of the Scrum methodology, teams gather daily for daily Scrum (standup meetings) to review progress and improve collaboration.

What is a Scrum Board?

A Scrum Board is a management and monitoring tool used to manage and monitor your Scrum project. Visualizing your product backlog, assigning items to your sprint backlog, and seeing how work is moving in your current sprint are all made easier by this tool.

Though they might be physical boards with sticky notes or cards attached, most Scrum Boards are digital and present in many project management systems.

According to Procurify, a purchasing software start-up based in Canada, organizing their sprints with the help of a collaborative platform saved them 70% of their time. Also, with the ability to see each other’s work, team members can cooperate with people from various departments.

Some advantages and disadvantages of using the Scrum approach and Scrum Boards to manage your projects are as follows:

What exactly is Kanban?

To understand the difference between Scrum vs. Kanban, let’s see what Kanban is.

Kanban is another prominent Agile framework that has gained popularity recently. Unlike Scrum, however, Kanban is less time-based and is focused instead on managing the volume of work in process (WIP).

To guarantee a continual flow of productivity, the Kanban framework was created to ensure that no one on the team is overworked or overburdened. It assists project teams in reducing bottlenecks, increasing efficiency, improving quality, and increasing total productivity, among other things.

What is a Kanban Board, and how does it work?

“Planned,” “In Progress,” and “In Review” are all presented on a traditional Kanban planning board or chalkboard. After that, each delivery is put down on a sticky note and assigned to the appropriate status. The sticky note moves across the project status whiteboard as the deliverable progresses through the phases.

The following are some advantages and disadvantages of utilizing Kanban as the development framework to manage your projects:

Kanban vs. Scrum: What are the differences?

It is important to note that Kanban and Scrum are both project frameworks designed to assist teams in adopting the Agile methodology, values, and principles. As a result, they share several characteristics. Process improvement, team collaboration, and breaking projects down into smaller and more manageable portions are all encouraged by both frameworks.

However, when comparing Scrum vs. Kanban, we can observe that the two methodologies take quite different approaches to implementing these ideas. Five critical ways that Kanban and Scrum differ are listed below:

Scrum vs. Kanban Roles and responsibilities

There are clearly defined duties and expectations for each of the three specific roles in the Scrum methodology.

Scrum masters serve as facilitators and coaches for the team. Their role is to assist in removing bottlenecks and ensure that the team continues to move ahead on the proper course.

Product owners are in charge of developing the product roadmap and ensuring that the demands and preferences of consumers are accurately translated into functional product features.

Kanban does not prescribe roles in the same way that Scrum does. Team members should maintain their current roles and responsibilities according to one of the four Kanban principles. This notion holds that teams will more quickly accept the framework if they are not required to worry about changing job titles and descriptions. So, this is a major difference to highlight when reviewing Scrum vs. Kanban.

Scrum vs. Kanban: Delegation and prioritization

Delegation and prioritization are important factors to consider when comparing Scrum vs. Kanban. Scrum is a project management methodology built on the principle of self-managed teams. Because they represent the client’s demands, the product owner may eventually have the last say on which features or tasks are prioritized on the product backlog (a list of all the features, tasks, and work that has to be done on the project). However, the whole team contributes to the decision of which tasks will be done in a sprint.

Similarly, Scrum team members often have complete autonomy when doing their tasks within a given sprint. They have control over which things they work on. However, it is possible that those decisions can be affected by collective decisions at scrum meetings. And when they work on them, as long as everything is completed by the end of the sprint.

Even though Kanban supports cooperation and leadership at all levels, it does not embrace the self-managed team to the same extent as Scrum does. The fact that Kanban encourages teams to preserve their prior responsibilities means that previous team configurations often govern how delegation is handled.

A typical manager’s responsibilities include prioritizing tasks and actively managing the workflow. Depending on the situation, they may assign particular duties to specific personnel or allow them to be done on a “first come, first served” basis.

When explaining the difference between Scrum vs. Kanban, we can see that they handle modifications and changes in very different ways.

Scrum necessitates that a sprint be planned before starting, that the team performs its task, and that the sprint concludes with product delivery and evaluation. Customer feedback, problems, bugs, and desired modifications are subsequently added to the main product backlog and prioritized for inclusion in future sprints.

In most cases, changes identified in the middle of a sprint are not handled until the next one, unless they are of such a magnitude that they need to be addressed immediately,  where the sprint is terminated. The sprint duration will not alter as a result of this method. However, if there are enough change requests, extra sprints may be required to be added to the overall project schedule.

When using Kanban, it’s okay to make adjustments at any stage in the process, and making changes right away is really encouraged. Depending on the degree of the modification, this might influence the project’s timeframe.

Toyota initially developed Kanban for automobile production, and it is now widely utilized for a variety of tasks and bits of labor that are repetitive in nature. When dealing with this sort of situation, when items are interchangeable, the focus is on providing a set volume rather than a specific piece of work. It’s common practice to discard or modify a product that’s been discovered to be broken/faulty or running behind so that it can be put back into production.

The combination of these tools helps highlight how productive the team has been so far and how prolific they must continue to be to finish the project on time.

It is common for Kanban to track cycles, lead times, and work in progress to gauge productivity.

When it comes to cycle time, it is the amount of time it takes a job to complete from the moment it is started. An average of how long work has been in progress is used in this calculation.

In general, lead time is a metric that counts the amount of time it takes from the moment a task is recognized or put on your Kanban board until it is finished.

Consider the following scenario: you were assigned a task on Monday morning, began working on it on Wednesday morning, and finished it by the end of the day on Friday. Using the example above, your lead time (Monday to Friday) was five days, and your cycle time was three days (Wednesday to Friday).

“Work in progress” is a metric that represents the average volume of tasks currently being worked on your Kanban board.

Scrum vs. Kanban: Due dates and delivery timelines

When comparing Scrum vs. Kanban, the due date and delivery deadline are two important elements to consider.

Scrum sprints are generally one to four weeks in duration, and at the conclusion of each sprint, a product increment is delivered. Any accompanying documents, such as training materials, would be supplied at the same time as the main package. Due dates or deliveries that fall in the middle of a sprint are slightly uncommon.

In the case of interdependent tasks allocated to the same sprint, the exception would be allowed to stand. If job B cannot begin until task A is finished, task A may be assigned an earlier due date to guarantee that both tasks are completed on time for delivery. Many times, there isn’t even a formal due date specified, and the team just handles these dependencies during their regular daily scrums.

Continuous delivery is at the heart of Kanban’s philosophy. Kanban teams often work on projects, items, or deliverables that are unrelated to one another. This allows for immediate delivery of finished products to the customer once a piece of work is done.

Teams have the option of grouping deliveries to avoid sending one item at a time. However, this is entirely up to the teams themselves. For example, you may decide to ship every Friday or every time you reach a total of 20 finished items.

When it comes to planning a project, which project plan board and framework are the most effective?

Whether or not you should utilize Kanban vs. Scrum depends on the sort of project you’re working on. Scrum and Kanban are two frameworks that are best suited for projects of different types and scopes.

However, here’s a quick breakdown of the situation:

Kanban is a more effective framework and project plan board for projects that you’ve done previously or that are recurrent, include numerous deliverables, and need to keep a close watch on individual capability and performance.

Scrum vs. Kanban: Does it have to be either-or?

Scrumban is a third option that may be considered. Teams that find Kanban too flexible and Scrum too rigorous would benefit from this mix of the two frameworks, which offers a happy medium for them. And we will address this in more detail in future postings, just as we did when we examined Scrum vs. Kanban in this post.

At Treinetic, we know that change is unavoidable, no matter what project you’re working on or who you work for. Embracing an Agile approach is the first step toward boosting communication, continually refining procedures, and having that flexibility built in. Therefore, you and your team are prepared for anything that comes your way. Agile methodologies are becoming more popular.