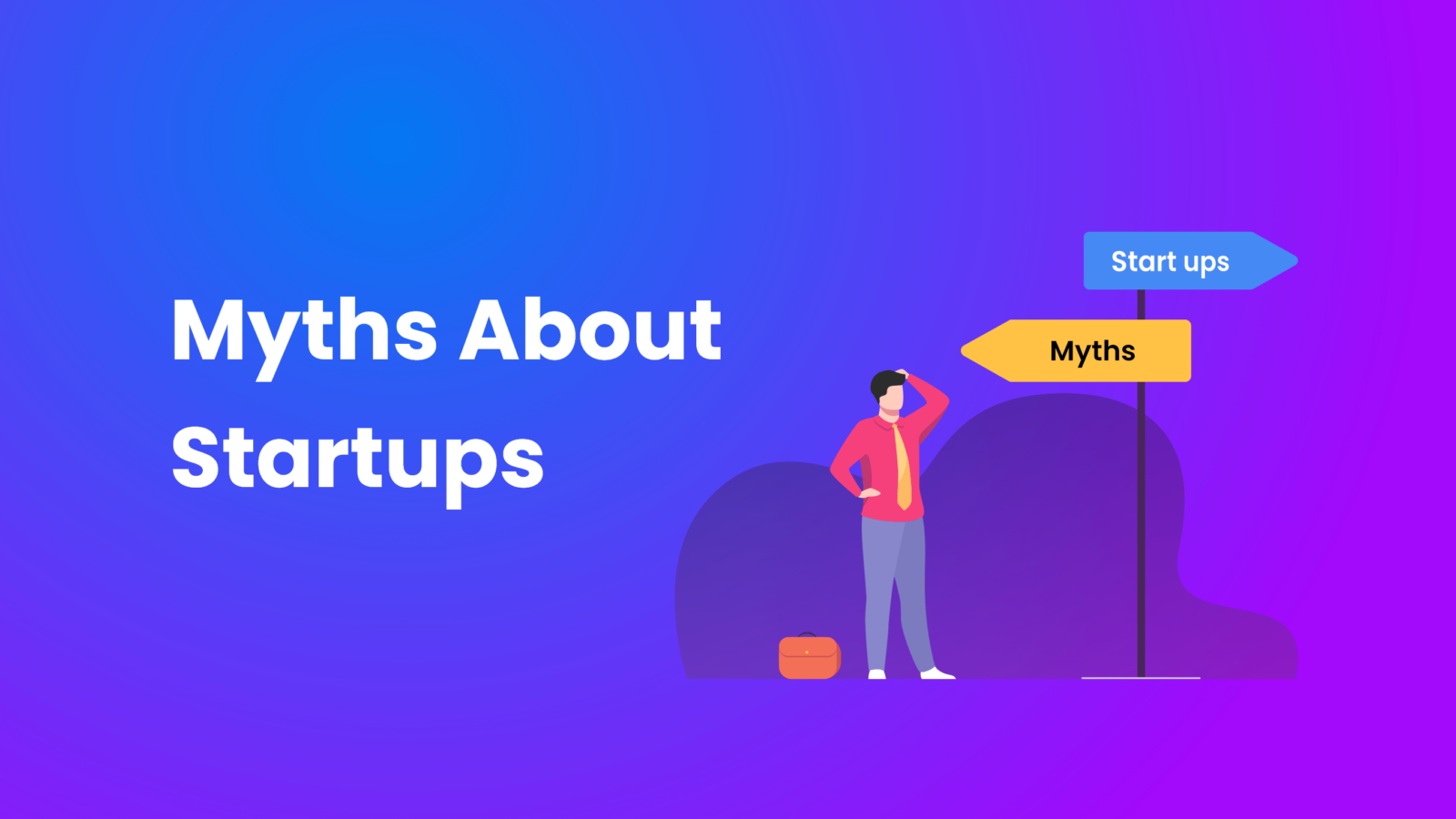 In the startup world, many things go around in circles. And these include the challenges, ideas, and facts that must be considered when setting up a startup or running a business. In the face of such challenges, myths emerge. Myths about startups are one of the reasons many confused entrepreneurs are hesitant to put their thoughts and ideas into action.

In today’s economy, many people start businesses, and many of them have received bad advice or stories that scare them. When you start your own business, you’re likely to get many of these things. But if you have the right tools and mindset, you don’t need to listen to most of that.

The following are some of the most common myths about startups: Besides that, let’s talk about why you shouldn’t pay attention to them while you’re working hard to get your startup off the ground. Let’s debunk those falsehoods right now, without further ado.

Myths About Startups That You Should Ignore

Myth 1: You don’t need a company culture when you first start out

This is one of the myths about startups that might derail your dreams and turn you into a failure. Consider the following scenario: you’re a group of four, six, or ten people. In this context, it seems obvious that focusing on corporate culture is a waste of time. You’ve just gotten started.

Right now, it would help if you had users, marketing tactics, and code that are both elegant and effective. Who has the time or the inclination to consider their company’s culture at this stage? But the truth is the opposite. Building a corporate culture from the ground up is among the most significant factors in the success of any organization.

Companies should care about their culture because it is the basic cornerstone of any business. A strong culture reflects an understanding that employees are the most valuable asset a company has and that preserving its employees is the most effective means of ensuring sustained success.

Employees are more likely to like their jobs when their needs and values align with those of their employers. And this is the case in companies with strong corporate cultures. It is more likely that you will have better interactions with colleagues and be more productive if you work in an environment where the culture is a good match. Hopefully, by now, you’ve learned that this is one of the most widespread myths about startups and that you should avoid believing it at all costs!

Myths About Startups 2: A company must have a unique idea to be successful

There is a misconception that startups are young companies with a novel business idea, a desire to make an immediate impact, and a desire to take over the market. This is one of the troubling myths about startups. Many people have this misguided belief since startup success stories like those of Mark Zuckerberg, Larry Page, Elon Musk, and Jack Ma are often cited as role models.

The uniqueness of their idea alone doesn’t make them successful, though. Instead, it’s because of their business model, how they market their products, and how they treat customers that they are so successful. Despite popular belief, Facebook was not the first social networking site. It was a rip-off of the houseSYSTEM and Myspace social networking sites. Google was neither the first search engine nor the most popular. In this case, Overture was the culprit. Google did not originate the concept of search monetization.

Zynga did not create Farmville; rather, it was a copycat version of Farmtown. The Chinese game HappyFarm was the inspiration for Farmtown. Microsoft Windows was not the first graphical user interface operating system. In reality, it was technologically inferior to its opponents. But it was able to win the market share battle opposing IBM and Apple because of its superior marketing. This was simply because Microsoft had a better understanding of what customers genuinely needed than either IBM or Apple.

Myth 3: You will not be successful in a startup because you do not have sufficient business knowledge

This is one of the trickiest myths about startups to debunk since it is so widespread. But don’t misunderstand what we’re saying. To be successful in business, you must understand the industry. Nonetheless, becoming a successful entrepreneur does not require an extensive understanding of the business world. Profits and costs are business fundamentals, so understanding them is not difficult. If you want to make money, you should buy things at a lower price and sell them for more money than you paid for them. Take training classes to fill up the gaps in your expertise if you don’t have adequate knowledge right now. In today’s world, taking courses doesn’t always imply attending an expensive institution.

There are several online learning resources available to you. Most importantly, you may assemble a group of individuals who have the necessary experience and knowledge to supplement your own.

Myth 4: If your business is not the first to produce a particular product or service, you will not be successful in your startup

Unfortunately, this is one of the common myths about startups that deters many would-be entrepreneurs. Some would-be entrepreneurs have decided to give up since another business has already done something similar to their original concept. Although being the first to market is preferable, it is not necessary. First to market may also imply first to fail in certain cases. Even though MySpace existed before Facebook, look at what happened in the end.

MySpace is no longer mentioned in any context. Trying to be the first isn’t the goal. Creating your own niche and branding your product or service is what will make you a successful entrepreneur in this day and age. Maintain a constant focus on developing your company while taking notes from the industry and your competitors.

Myths About Startups No. 5: Startups Always Require the Support of an Investor

Many successful companies have been launched without the support of a major investor, even though you need to be financially solid to get your business off the ground. Virgin founder Richard Branson did not accept any outside funding during his early years in business. In his dorm room at the age of nineteen, Michael Dell, the current CEO of Dell Technologies, began selling computers without the assistance of any other investors.

You shouldn’t believe that securing an investor is the sole option if you don’t have the money or resources to launch your firm independently. There are a variety of additional options for obtaining financial support, including:

Myth 6: If you don’t achieve success within a year, you will never succeed

One of the most widespread myths about startups is that they need a lot of capital. It’s a tragedy that many young entrepreneurs give up their startups due to this. At the risk of seeming repetitive, let’s revisit the numerous entrepreneurs who struggled for years before finding success. Steven Spielberg, the renowned American film director and producer. Walt Disney and Henry Ford are two of the most famous people in the world. Mark Cuban is a businessman from Miami, Florida. Steve Jobs is a revolutionary American entrepreneur.

Now and then, a poor entrepreneur comes up with an idea and, a year later, has millions of dollars stashed away in his bank account. But this is an exception, not a general norm. It would help if you gave yourself a lot of time to try out your new ideas. If you fail, try again.

Myth 7: You have to put in a lot of hours, never sleep, and generally be miserable to succeed

Working hard is one thing, and working harder beyond your limits and getting exhausted and feeling miserable is another thing. Among the most common myths about startups and life is that they’re dreadful experiences. Nothing else is happening in your life as you spend your days and nights at the workplace, powered by energy drinks and pizza. Instead of encouraging outrageous work hours, we’ve discovered that developing a very stable daily routine is much more effective.

What we do, in reality, runs contrary to the commonly held view that working hours at a startup must be prolonged. You can’t give up today to save yourself for the future. For your startup’s success, you must work both smarter and harder. When you work hard, don’t make it seem like you have to work nonstop for the whole year without a day off.

Myth 8: You are not allowed to share numbers or sensitive information

The idea that, as a startup, you must keep your financials under wraps is another fallacy that we are devoted to dispelling as much as we can. After all, you are a small business, and disclosing your most sensitive secrets will result in your demise! We discovered that the opposite was true.

We were upfront about finding our investors, how much money we were making, and our long-term goals for being an open corporation. And we feel that being transparent and sharing our success has helped us build goodwill among our users and our colleagues in the business.

Treinetic’s Thoughts on Myths About Startups

Everything has a beginning, no matter how small or big it may be. Furthermore, understanding the difference between startup myths and startup realities is critical before launching your own startup business. These myths should be kept in mind while you’re getting ready to launch your startup.

We’re not arguing that rapid success is impossible or that you shouldn’t be enthusiastic about your startup. It’s important to remember that starting a business is a long-term endeavor that requires patience, hard work, and perseverance. In our case, we’re an award-winning business because we’ve got the right mindset and reasonable expectations. You can start pursuing your business dream right now and become an award-winning company like us.