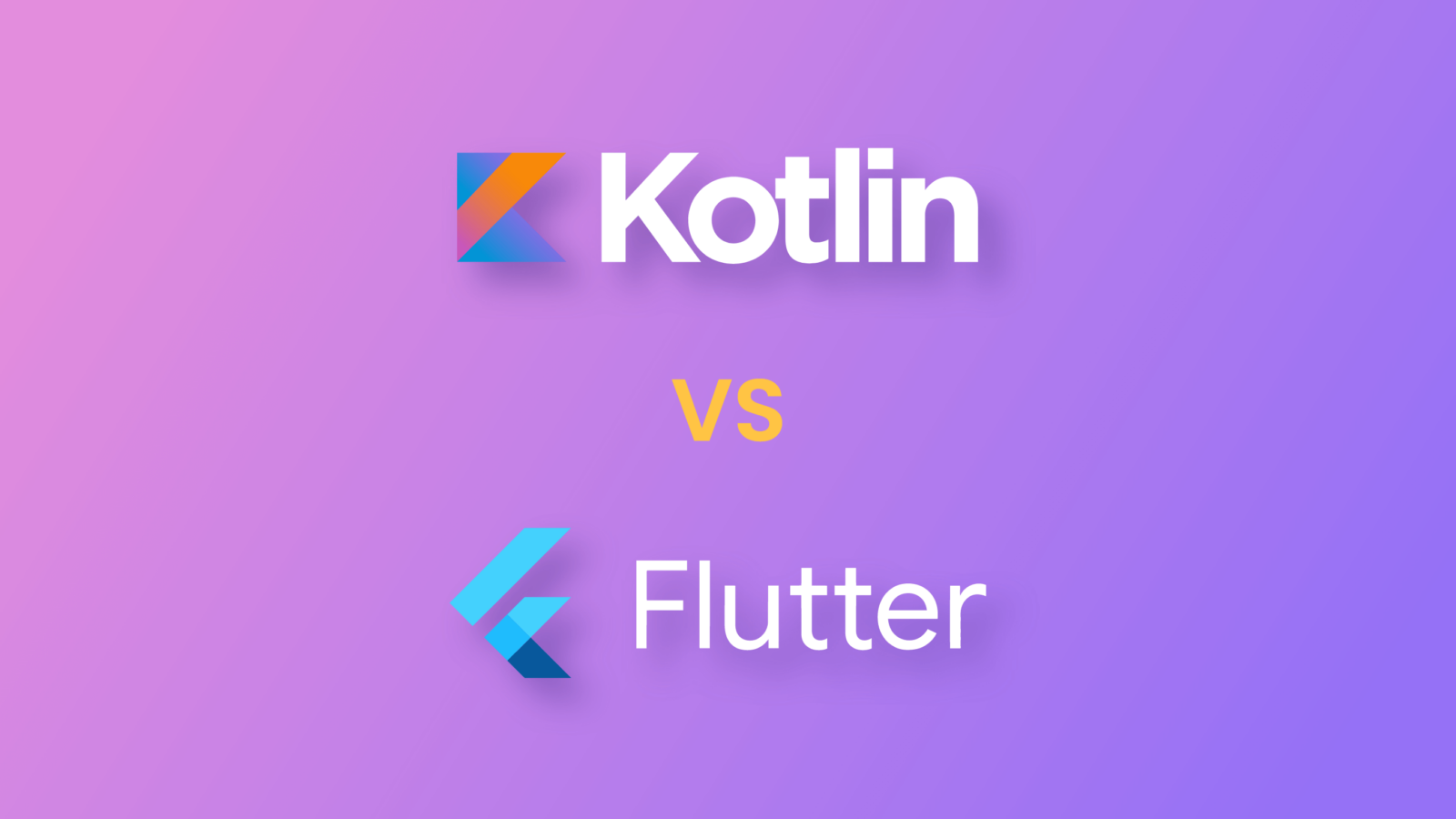 Choosing between Flutter vs Kotlin has been a hot topic in recent years as cross-platform development has grown in popularity. Additionally, Allied Market Research forecasts that the worldwide mobile application market will reach $407.7 billion in 2026. And this creates a debatable battleground for supremacy in the development tools and frameworks for mobile apps.

So, to help you choose between Flutter vs Kotlin, we’ve put up this comparison today. What exactly is Flutter? What is Kotlin, and does it pose a threat to Flutter’s popularity? And what are the benefits of each technology? Let’s go through everything properly.

Flutter vs. Kotlin: A Brief Overview of Each Technology

Flutter is a Dart-based user interface toolkit developed by Google to build a native-like mobile app with a single codebase. It gives app developers the ability to use a single programming language to create applications for both iOS and Android. Additionally, you can use Flutter to develop macOS applications and are presently undergoing beta testing for web applications.

As the official programming language of Flutter, Dart makes use of the Flutter Future class to enable asynchronous programming, which improves application responsiveness and speed. Additionally, the comprehensive toolset makes it an excellent choice between Flutter and Android Studio.

When Is Flutter Suitable?

Flutter is an excellent option for creating minimum viable products (MVPs) and prototyping applications in situations when time and resources are constrained. It is suitable for small, medium-sized, and even large-sized corporate applications. It works well in contexts where user involvement is critical to success, such as online stores, financial technology, and business applications.

Large corporations such as Alibaba and SpaceX have understood the advantages of the Flutter framework and have adopted it for mobile app development. The following is a list of the top five apps developed using this Google UI framework.

Kotlin is a statically typed, open-source programming language intended to work with Java. As a stand-alone language, it outperforms Java in terms of features, integrating nicely with the older language. Due to its multiplatform capabilities, Kotlin enables developers to share code, logic, and data across various platforms, including iOS, Android, the web, and much more.

What is Kotlin Multiplatform?

This is a cross-platform mobile development kit created by the Google cross-platform mobile development team. Practical programming lies at the heart of Kotlin Multiplatform’s mission: to assist developers in fulfilling the increasing demand for mobile apps that work on multiple platforms. Also, there’s no need to write the code twice if you do it this way. Therefore, using Kotlin Multiplatform, you can build an iOS app and write an Android app.

Is Kotlin Multiplatform a game-changer in terms of cross-platform development? What benefits does it provide, and will it simplify the process of writing code? Here are the benefits:

Because one coder adds model objects, networking, business logic, and unit tests while the other developer plugs in the feature, Kotlin Multiplatform allows faster feature development. This method shortens the development time, particularly when new features are added.

Concentrating your team’s efforts on a single cross-platform application leads to better communication, resulting in improved bug identification and cleaner code. On the other hand, a lack of honest and consistent communication makes it more difficult to detect mistakes early in the development process, delaying the project’s progress. This collaboration will also result in improved functional uniformity across the applications.

Due to the modularity and testability of the code, new developers joining your project will have no difficulty understanding what is going on.

When Is Kotlin Suitable?

Kotlin attempts to address many of Java’s shortcomings, but it still has a long way to go. Compatibility with Java is one of the reasons behind Kotlin’s popularity. Kotlin allows developers to integrate it into their current apps, cross-platform apps, and write server-side code.

Starting a new Android project or making modifications to an existing one is a breeze with this toolkit! Therefore, with regards to cross-platform applications of any size or complexity, it’s a solid option.

Kotlin is used by several large companies, including:

Flutter vs. Kotlin for Android Development

Here’s a quick comparison between Flutter vs. Kotlin

In some respects, Kotlin and Dart are more comparable in terms of syntax. While Kotlin does not use semicolons, while Dart does, both languages behave identically when commenting and managing white spaces. Additionally, Kotlin and Dart are both Object-Oriented Programming Languages.

Both Kotlin and Flutter have respective advantages and disadvantages in terms of performance. The hot reload and hot restart capabilities of Flutter are two of the most impressive features. They allow developers to make changes to their code and immediately observe how the user interface changes, reducing development time and making it simpler to create apps.

On the other hand, Kotlin gives you greater access to native capabilities and components like the camera and Bluetooth. In comparison, Flutter does this via libraries written in native languages like Kotlin, Java, Swift, or Objective C.

Both Kotlin and Flutter have a thriving developer community. However, given that the Flutter framework is relatively young compared to Kotlin, it seems to have a more active membership and increasing popularity. Additionally, the Flutter documentation is very thorough and up to date. This is a fantastic place to start if you’re new to the framework since it gives you information based on the learning curve and your own experience.

Flutter is open source and completely free to use in terms of price while also providing the quickest method to build your MVP. Developing a mobile app using Flutter takes much less time and money, as you can use a single codebase to develop and maintain applications for Android and iOS at the same time.

The usage of Kotlin is likewise completely free and open-source. However, since the Kotlin SDK provides semi-native functionalities, the cost of developing a mobile application increases dramatically. Kotlin’s pricing implications make it a costly programming language, particularly when developing prototypes and minimum viable products.

Flutter runs well but exhibits more delays than Kotlin, which is usually quicker because it compiles to the target platform’s format. If speed is critical, Kotlin is the superior choice. Thus, with regard to Flutter vs Kotlin, the winner is Kotlin.

Summary of Kotlin’s Pros and Cons

Summary of Flutter’s Pros and Cons

Flutter vs. Kotlin: The Main Takeaway

There is no such thing as a fault-free framework or programming language; each has its own set of advantages and disadvantages. Flutter and Kotlin both provide superior performance and substantially reduce development time and costs. Even though it is new on the market, Flutter is more popular than Kotlin in certain aspects. On the other hand, Kotlin is more suited to developing Android applications. When it comes to cross-platform development, both provide native-like performance via a single code base.

As an award-winning software engineering firm, we believe that technology selection is highly dependent on requirements and other factors. We hope that this article has provided you with sufficient knowledge about Flutter vs Kotlin to enable you to choose the one that best meets your requirements.