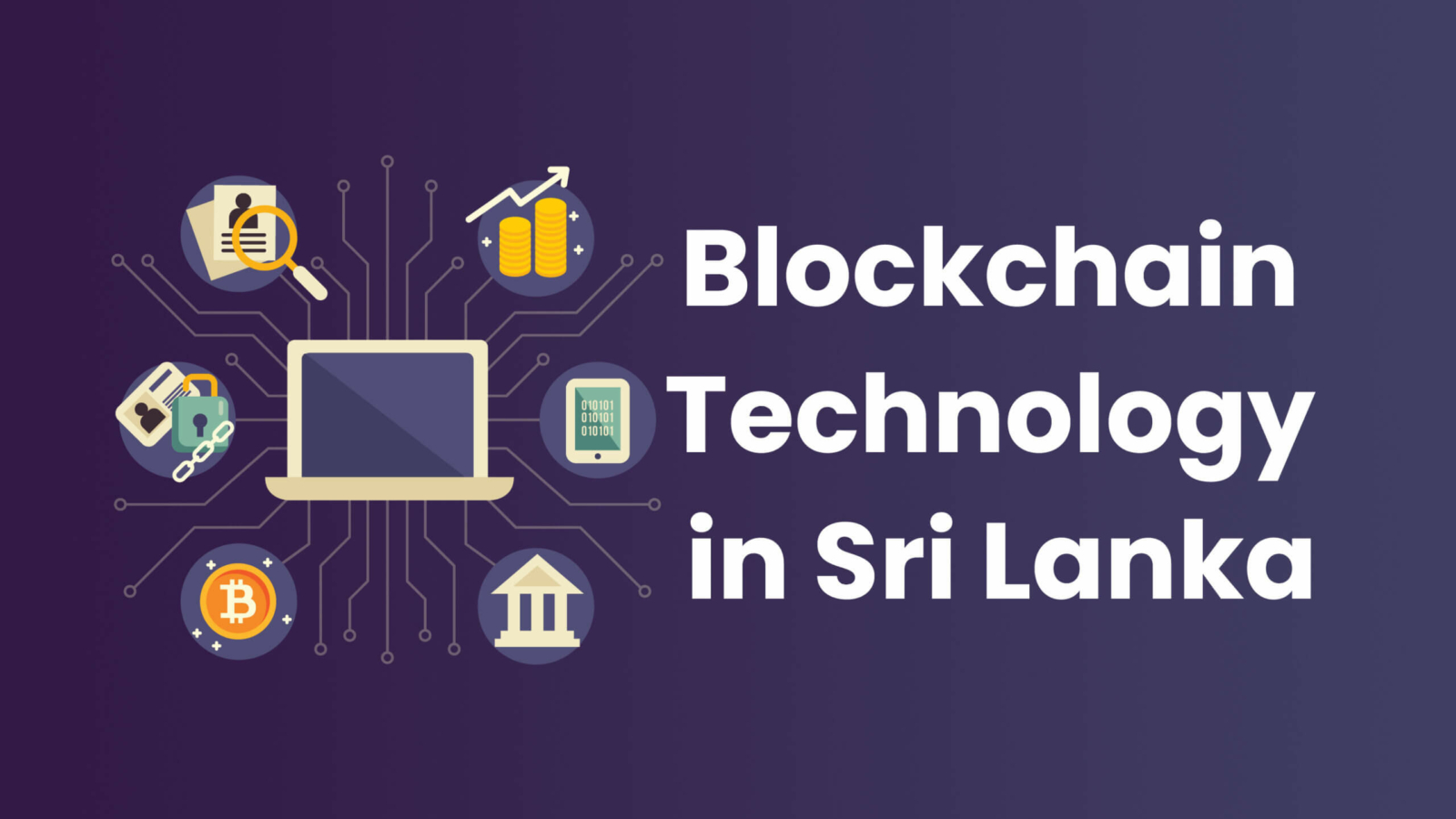 Blockchain! Not only in the tech world, everyone who has a little awareness about the new digital world might hear this word one or more times. Surely, the main reason is Bitcoin, a cryptocurrency, an exceptional application of Blockchain technology. I am not going to clarify what blockchain is, instead I would like to discuss what benefits we, Sri Lanka, especially the Government, can get via the Blockchain & distributed ledger technology. If you are new to blockchain, I would suggest reading some articles on blockchain technology including this: https://www.ibm.com/topics/what-is-blockchain , before diving into this discussion.

The main advantage of blockchain is its immutability of data written into the blocks with a distributed ledger, cryptography & consensus (mutual agreement on something) mechanisms. Unlike conventional software applications where a single server or few servers are owned by a single organization, blockchain imposes a Peer – Peer Network architecture, and everyone in the network must hold the same copy of the ledger. Therefore tampering or deleting data is almost technically impossible in a blockchain network and increases the trust among the participants.

In a database, four main operations are possible: Creating, Retrieving, Updating & Deleting (CRUD) the records but, in a blockchain ledger Updating and Deleting is eliminated purposely by imposing once you write something, it can never be edited or even deleted. Because of this, blockchain-based systems are more transparent, reliable & accurate when compared with non-blockchain systems.

Well, how will these advantages offer benefits for the products, companies, or Government institutions that are using blockchain technology? Predominantly trust or credibility is something well-worth in a software application, especially in a Government sector where in most cases it deals with people’s money. A country like Sri Lanka that needs monetary aid from the World Bank, IMF, etc. can obtain massive benefits if the crucial government-based systems have transparency and reliability. Blockchain-based systems will enhance the ‘Digitalization Process’ in massive steps and reduce the manual workload in Govt. organizations. Eliminating frauds that can be done with conventional software systems would lead to more transparency systems that carry off the trustworthiness of the general public and the international community. But, this needs a genuine intention from the political leaders!

Let’s turn to the international, not too far, our neighbor India. India published “National Strategy on Blockchain” in December 2021. It consists of Scope, Roadmap, National Scenarios, Strategies & Targets for 5 years, National Blockchain Framework, etc. A clear & comprehensive document stated what they are going to do and how they are going to achieve that. Some developed applications and pilot projects have been mentioned there (section 5) related to governance, banking & finance, cybersecurity, etc. It seems that India’s Ministry of Electronics and Information Technology (MeitY) has a definite vision of implementing blockchain solutions to their most critical use cases relevant to the public sector and offering benefits to their people.

Well-known ‘Smart Dubai’ bundled with blockchain technology is another great example of blockchain use cases in governments. As mentioned in the ‘Dubai Blockchain Strategy’ they intend to be the “first blockchain-powered government” that saves 5.5 billion dirhams (nearly 1.5 billion USD) per annum in document processing, the value of one Burj Khalifa’s tower!!!

This article describes the Governments that are using or experimenting on CDBC (Central bank digital currencies): https://consensys.net/blog/enterprise-blockchain/which-governments-are-using-blockchain-right-now/

Suitable for Sri Lanka? But a few questions arise here:

Are Blockchain-based systems suitable for Sri Lanka? Especially for the Government?

Will it be possible to implement blockchain systems in Government institutions?

The massive obstacle is the corruption-based system in Sri Lanka (most developing countries) that demotivate transparency and always tries to hide the information from the general public. The writer read an article published in an investigative newspaper that mentioned a major Government organization’s software application that is developed to allow adding new users by violating the ordering mechanism purposely! Altering & deleting data/records from the database level backs up this kind of malpractices and reduces the trust among the people about the existing systems in the Government institutions (same for the private sector as well). There are massive allegations to the Governments who have led Sri Lanka including the incumbent, for escalating frauds and misconduct to gain their own advantage.

Well-known ‘Computer Jilmart’ (computer-based malpractice) raised by the opposition in 2010 in Sri Lanka is a distinctive example of the attitudes of the citizens in Sri Lanka towards the computer-based systems in Government organizations. Although any ‘Jilmarts’ hadn’t happened (the same group claimed 3 years later) people were believing that some frauds were done with the support of IT systems. Changing this frame of mind from Sri Lankan people is very difficult as long as using the conventional software systems in the Government institutes. On the other hand, introducing tamper-proof & immutable software systems are difficult as long as the fraudulent ruling system is being practiced. But the responsibility & the accountability is goes to the Digital Technology and Enterprise Development Ministry of Sri Lanka, at least get the support of the leadership and start to rearrange the policies and establish a ‘Blockchain Strategy for Sri Lanka’ to build more transparent & decentralized Government.

What should be done?

Before all, need a way to educate the people, especially the Government officers who have very low literacy in the latest ‘Digitalization and Decentralization’. Basic computer literacy or handling an ERP system isn’t enough to perform the duties in the modern world for any ‘non-IT’ officer but, the comprehension of modern digitalization is essential. While establishing a ‘National Blockchain Strategy’ there should be a way to enrich the knowledge of the responsible officers in the Government as they are the key to running the systems.

Educating the next generation is mandatory with the latest evolutions in computer science & IT like Blockchain, AI-Machine Learning, Big Data & Cyber Security. My opinion is the very primitive concepts of these technologies should be introduced to the G.C.E. (O/L) syllabus, better to introduce a non-compulsory subject ‘Modern Digitalization’, and wrapped these concepts with some practical examples. Changes must be made to the ICT subject in G.C.E. (A/L) by adding intermediate knowledge of the said technologies and practice labs.

Main applications should be developed or revamped with blockchain layers:

There are thousands of software companies in Sri Lanka but, extremely limited of them are concentrating on blockchain-based solutions, products is a pathetic situation. This is even after 11 years of the first practical blockchain application (Bitcoin) and 6 years after the Turing-complete, a not-only-finance platform like Ethereum and Enterprise suited platform like Hyperledger. Our companies must more focus on these kinds of solutions and offer support for the Government sector to achieve the maximum out of blockchain technology! Support may not be the correct word, Influence is the best!!!

In summary, a bunch of profits can be gained with Blockchain technology as a country if we grab it accurately. It seems that people are only focusing on cryptocurrencies, wallets, tokenization, etc., and miss all the other great utilizations. The reason is most of them only know or learn about the crypto and related stuff but didn’t analyze what is beyond them in the Blockchain ecosystem. Learning & practicing in blockchain technology indeed need a sizable knowledge and skills in software product engineering & computer science (for the most part back-end technologies) may be the route cause for this.

It is unavoidable for the rulers and policymakers to take the necessary steps to make policies & strategies with the support of the appropriate intellectuals to develop a solid foundation for adopting Blockchain technology in Sri Lanka. This should be a quick process but, analyzing the long-term risks, personal data protection (public blockchains), aligning with the existing digitalization architecture, etc. should be done with due diligence. As software professionals, we are expecting a significant contribution from authorities and bureaucrats to implement more blockchain applications in the Sri Lankan Government sector and are willing to provide support as it is our ought and duty.